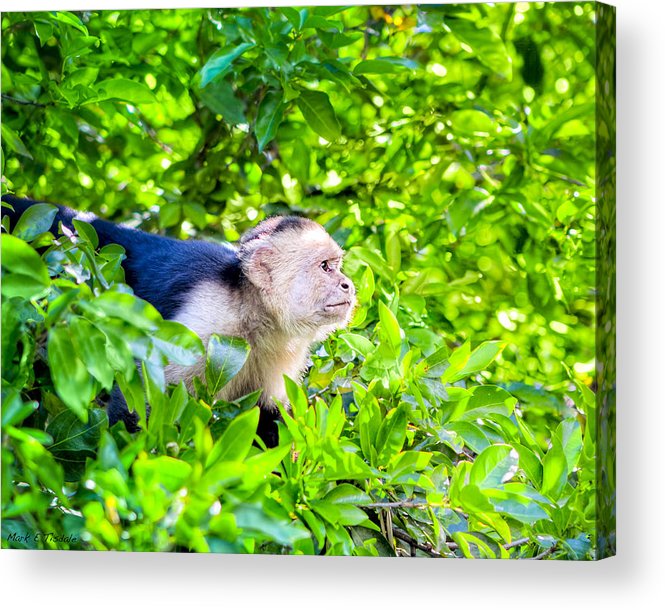 One Determined Monkey - Costa Rica Wildlife acrylic print by Mark Tisdale.   Bring your artwork to life with the stylish lines and added depth of an acrylic print. Your image gets printed directly onto the back of a 1/4" thick sheet of clear acrylic. The high gloss of the acrylic sheet complements the rich colors of any image to produce stunning results. Two different mounting options are available, see below.

I know that there's a degree of anthropomorphization involved, but the first thing I thought when I saw the look on this capuchin monkey's face was... more

I know that there's a degree of anthropomorphization involved, but the first thing I thought when I saw the look on this capuchin monkey's face was that he had a certain look of determination, as if there was a goal clearly in sight that he was determined to capture! In truth if you look at images of these "new world monkeys" you'll see this is a fairly typical expression. I guess they are serious little jungle creatures! I encountered them first on a river tour in Palo Verde National Park in the Guanacaste Province of Costa Rica, but over the course of my trip, the sounds they made at sunrise and sunset became a fixture of my trip through Costa Rica and Nicaragua. The noise of the jungle was soon as normal as hearing crickets back home. No matter what, I will always look back on this little guy in Costa Rica and think that he was a determined monkey with goals clearly in his sights!

Life is full of happy surprises. After just over a decade working in the 9 to 5 cube world, I threw caution to the wind to follow my dreams of being a full time visual artist. That was five years ago! Is it easy? No, but something truly worthwhile is rarely simple. My body of work is wide ranging from photographic scenes of far away places, more near and dear locations, and more fanciful artwork. It's all crafted with a heartfelt love for finding the beauty in little captured moments. My artwork also hangs on walls near and far from private homes to businesses who have chosen to decorate with my art. Whether you've purchased one piece or a house full or you simply admire and share with your friends, your patronage of my art is...